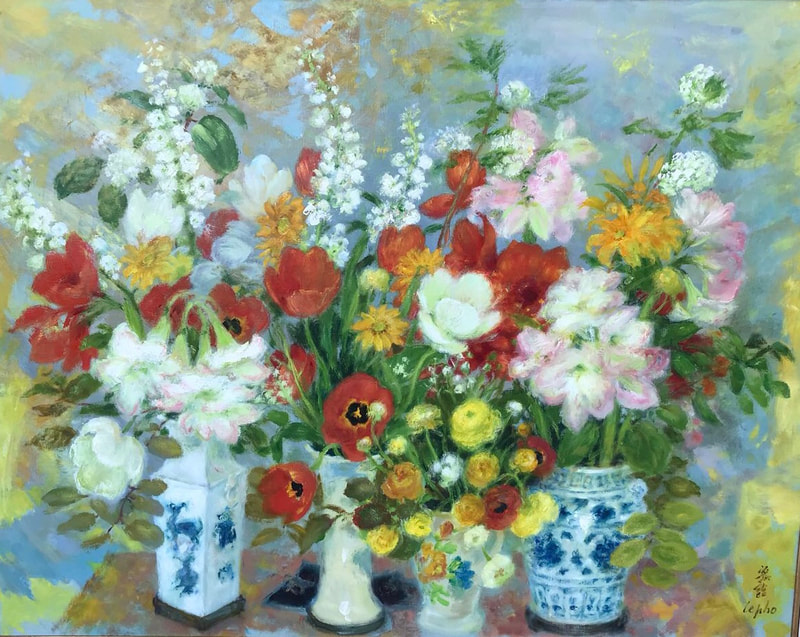 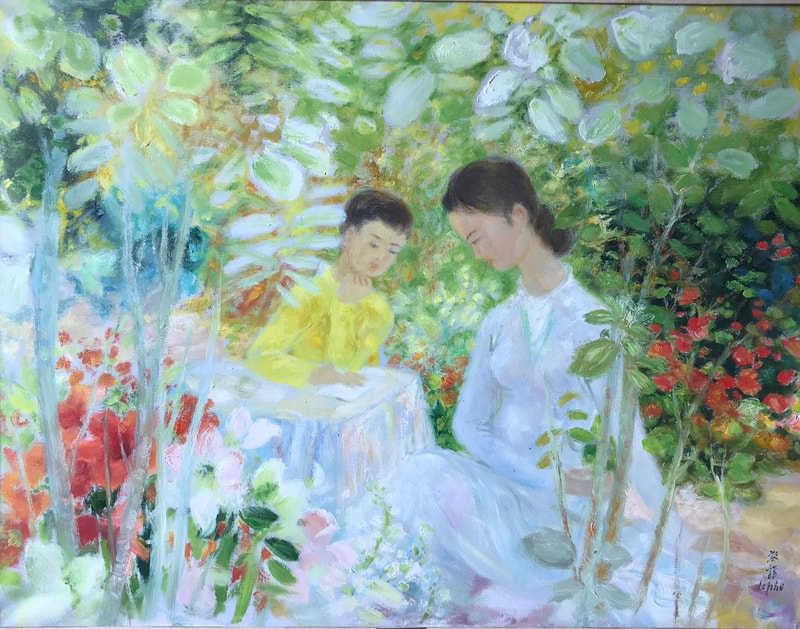 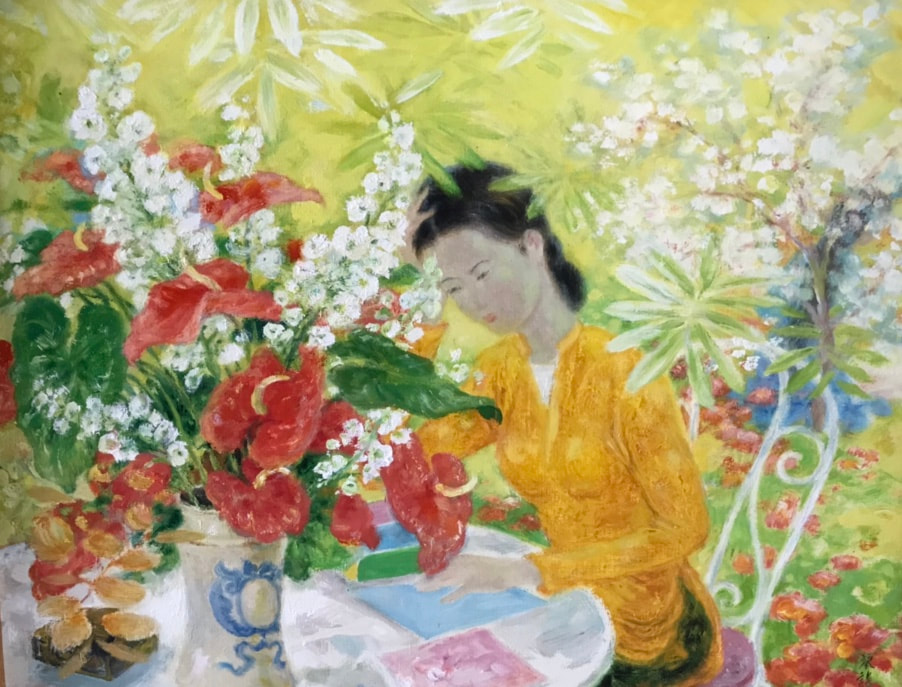 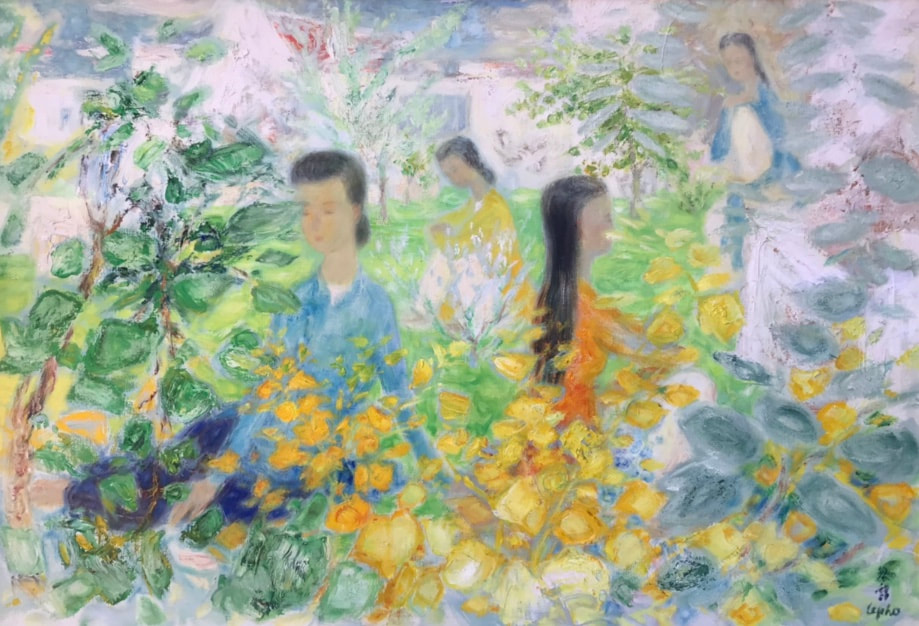 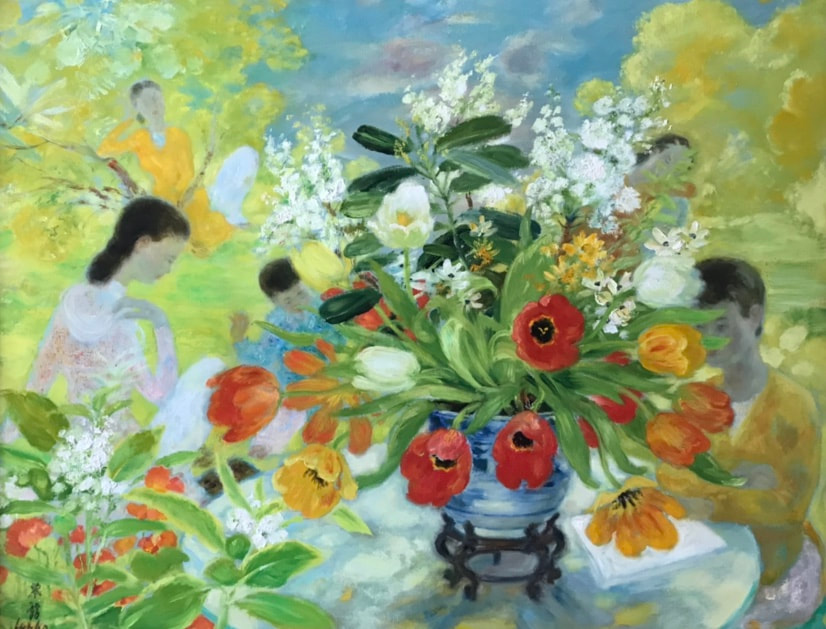 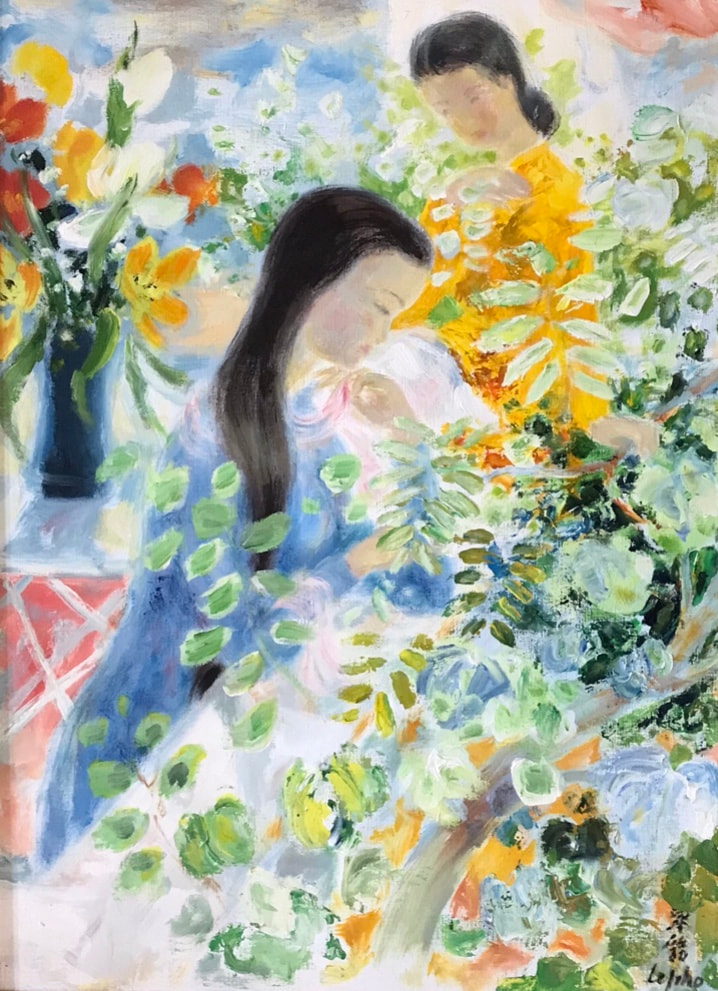 The artist Lê Phổ was a pioneering Vietnamese modernist whose Mandarin sensibility and late embrace of French art endowed his art with considerable sophistication and grace. His characteristic subjects—Asian women and children, still lifes and florals—persisted as his style evolved from a Chinese-influenced linear style to a more Impressionistic style. “The women in my husband’s paintings are all Asian, not European,” noted Lê Phổ’s wife, Paulet Lê Phổ.

Lê Phổ was born in Viet Nam on August 2, 1907. He was tenth child in a family of twenty fathered by the senior mandarin and Viceroy of Tonkin, Lê Hoan. Because of his father’s status Lê Phổ received a cultured education, including training in brush painting. Le Hoan was suspected for many years to have been a front man for the French Colonialists, and may have taken part in suppressing a peasant uprising led by De Tham. Although recent records appear to vindicate Lê Hoan, Lê Phổ’s early life was colored by these politically charged events. Orphaned at a young age, he was raised by his brother’s wife.

​At the age 18 Lê Phổ became a member of the first class of students to attend the new French sponsored École Supérieure des Beaux-Arts d’Indochine (College of Fine Arts of Vietnam) in Hanoi in 1925. The École was founded and directed by Victor Tardieu, a muralist and history painter who had been a student along with Henri Matisse in the Atelier Moreau. Students at the École were expected to maintain their Asian and Vietnamese identity by instructor Joseph Inguimberty who encouraged them to paint on silk or work in lacquer. Although Inguimberty, who taught perspective and oil painting, disliked the works of the French modern painters Dufy, Matisse and Rouault, he still required his Vietnamese students to study (but not copy) their works.

In 1928, Lê Phổ opened his first exhibition in Hanoi with artists Vu Cao Dam and Mat Thu. In 1930, he received a diploma from the École des Beaux-Arts and was given his first commission, to make lacquer screens and murals at the Governor's Palace. Although he made a single lacquer screen and lacquer box (which he gave as a gift to Victor Tardieu, who considered Lê Phổ his best student) he was allergic to lacquer and never used it again.

In 1931, the 24-year-old Lê Phổ was sent to Paris by the Government of Indochina as Assistant to Victor Tardieu, who at the time was the artistic director of the Angkor Pavilion at the Exposition Coloniale. In 1932, Lê Phổ entered the École des Beaux-Arts, Paris. During his two years in Europe, Lê Phổ traveled to Belgium, Italy, and the Netherlands, visiting museums and adding to his knowledge of European painting.

Upon returning to Hanoi in 1933 he was made a professor at the Hanoi École des Beaux-Arts, a position that he held from 1933 to 1935. One student later recalled Lê Phổ this way: He always wore glasses and a well-kept suit. He did not talk much and was very gentle with the students. When a student produced a good painting, he often complimented, “C’est pas mal.” (That’s not bad).

Lê Phổ returned to Paris in 1937 to serve as a delegate to the International Exposition, and also as a jury member. Phổ then remained in France, and had his first one man show there in 1938. He became an advisor to the Vietnamese Embassy in Paris and regularly exhibited at the Salon des Independants. Lê Phổ enlisted in the French Army in 1939, but was discharged a year later. In 1943, he met the artist Henri Matisse who advised him to lighten his colors.

In 1946, together with Trần Đức Thảo and Trần Hữu Tước, he provided assistance to President Hồ Chí Minh and Prime Minister Phạm Văn Đồng while they attended the negotiations between Viet Nam and France on Vietnamese independence in Fontainebleau. At that time, Lê Phổ and several other Vietnamese intellectuals wanted to return to Viet Nam to fight the French, but Ho Chi Minh—who gave Lê Phổ an inscribed photo of himself—advised them to stay in Paris.

Through the late 1940s Lê Phổ painted with long, thin brushes using watercolor on silk. Lê Phổ’s style and technique during this period shows the influence of Chinese art. His subjects, including women, bamboo, birds and lotus flowers were traditionally Asian. His female figures from this period have calm, idealized features and appear in calm, graceful poses.

In the 1950’s after Lê Phổ absorbed the influences of French modern artists including Pierre Bonnard and Odilon Redon. He worked in oil, developing a soft, colorful style that shows the influence of Impressionism and Post Impressionism. Through exhibitions in Algiers (1941), Paris (1945), Brussels (1948), San Francisco (1962), and New York (1963), Lê Phổ built an international reputation.

Because of his refined skills and his influence as a teacher, Lê Phổ’s paintings are highly sought after. A decade before his death he converted to Catholicism and took the name “Victor” after this mentor Victor Tardieu. Lê Phổ died in Paris in 2001, after donating 20 of his works to the Viet Nam Museum of Fine Arts. He told friends that although he had lived in France his soul had always remained in Vietnam.